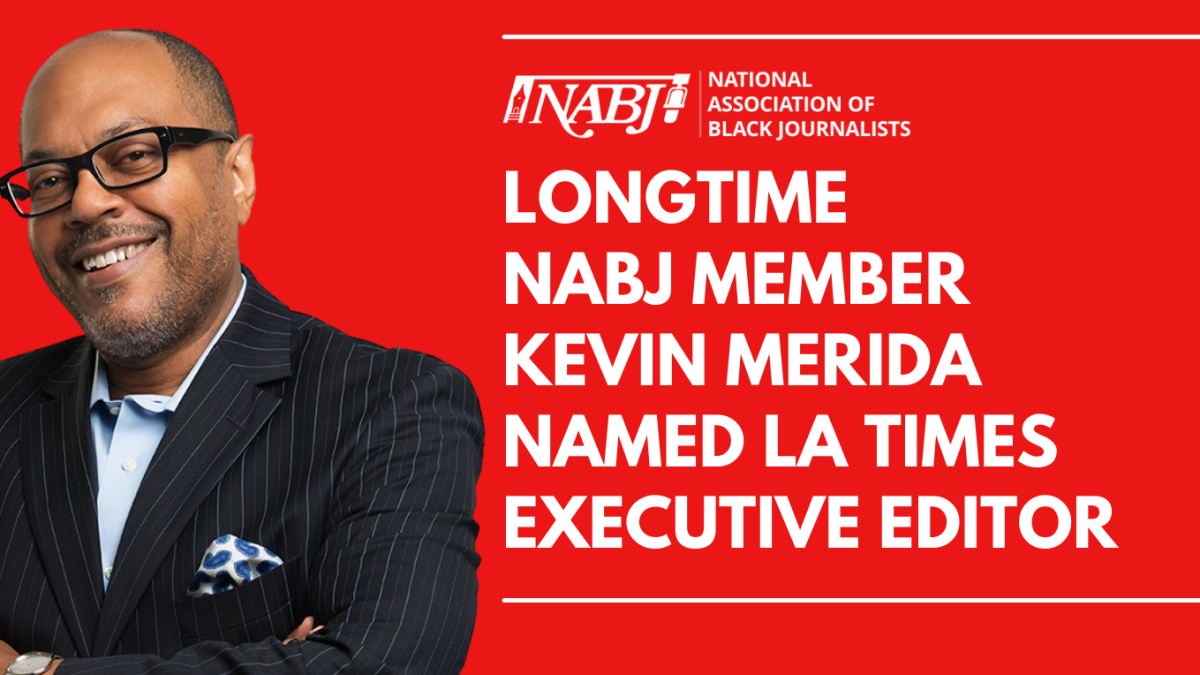 The National Association of Black Journalists (NABJ) is celebrating a huge appointment at the Los Angeles Times. After a 5-month search, longtime NABJ member Kevin Merida is the publication’s new executive editor. He will join the LA Times in June.

According to The Washington Post, in the LA Times’ 139-year history, “Merida is the second African American to lead the Times’ newsroom. Dean Baquet, currently executive editor of The New York Times, previously held the position during Tribune’s ownership.”

He is the first Black executive to lead the newsroom in nearly 20 years, and according to the LA Times, he is only “the third person of color to steer the largest news organization in the West.”

“I am looking forward to working with a tremendous LA Times staff, creating something magical together and shaking up the media landscape,” Merida told NABJ. “At this moment, I am reminded of all I’ve learned and all those who helped me get better. Some of my fondest memories in this profession have a connection to NABJ. Thank you, NABJ, for what you’ve done for Black journalists. For all of us.”

Merida, a veteran journalist who has been in the industry for 40 plus years, currently serves as senior vice president at ESPN and editor-in-chief of The Undefeated.

Before his work at ESPN, Merida served as The Washington Post’s first Black managing editor for news, features, and its universal news desk. He is heralded for his work in leading The Post’s “digital transformation” that led to one of the largest increases in audience growth across the news and media industry.

Merida’s appointment is met with jubilation by NABJ Board members.

“As a member, Kevin has served NABJ with great dedication and has played an integral role in the forward movement of telling untold Black stories in the industry. We are proud to have named him our 2020 NABJ Lifetime Achievement honoree,” said NABJ President Dorothy Tucker. “Today’s announcement is great news and reflects what our advocacy efforts are all about. The LA Times has taken a big step forward in the area of diversity and inclusion with this impactful appointment. It is a source of pride to now say that one of the top papers in the country is headed by a Black executive.”

“We are excited about this elevation and call on other media companies to recruit and identify top echelon Black talented executives as well,” said Chaney. “The time is now for news managers to acknowledge the skilled, dedicated corps of Black journalists who have helped build their newsrooms for decades by fully supporting their ascent to leadership within these companies.”

Merida is tasked with transforming the LA Times into a “digital powerhouse,” according to the LA Times article announcing the appointment, which can be found here.

“I have known Kevin since he was an editor at The Dallas Morning News and I was just beginning my career as a reporter at the Austin American-Statesman in 1991,” said NABJ’s Vice President-Digital Roland Martin. “He has represented the best of journalism from the beginning and is indicative of the talent that exists among Black journalists nationwide. I’m ecstatic that he is getting the chance to run a major national newsroom, and the staff of the LA Times should be thankful that they are getting someone with impeccable credentials and an astute understanding of what constitutes news in a diverse America and world.”

President Tucker also applauds NABJ’s Los Angeles chapter for its work in keeping diversity a priority at the Times.

“I’m incredibly excited to continue to see the Los Angeles Times making progress to be a more inclusive organization,” said NABJ-Los Angeles Chapter President Jarrett Hill. “I look forward to working together to continue this progress, as we all work to make newsrooms, media organizations, and their coverage more equitable and reflective of the communities they serve. Kevin has a track record of leadership and innovative thinking that will be a valuable asset to improving the journalism community here in Los Angeles, hopefully creating models for the future of this industry.”